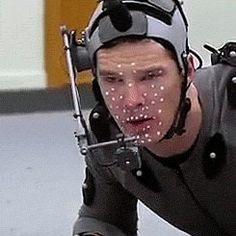 When great actors perform their craft, they seem to put their entire being into it. An actor doesn’t just deliver lines, he presents the full essence of his character. That affects how he speaks, how he moves, and how he reacts on both the conscious and subconscious level.

But what about voice actors? Aren’t they just delivering lines? After all, you don’t actually see them in a film or audio drama. You just hear them.

This is a common misconception held by many if not most people who don’t deal with actors on a daily basis. The truth is that if you watch most voice actors, you’ll see that they use even more physical movement than do screen actors, in part because they need that movement to be communicated by the voice.

I ran across the following video clip today that perfectly illustrates the marriage of movement and voice in a voiceover session for an animated character. In this case, the actor is Benedict Cumberbatch and the animated character is the dragon, Smaug, from Tolkien’s “The Hobbit.”

Notice that Cumberbatch could have done the scene sitting or standing, but chose, instead, to assume the position of the dragon on screen. Every movement affects his breathing, the strain on his vocal chords, and the tension in his words.

I confess that I’ve never done voiceover work where I’ve had to put on a suit of this sort and physically act out this much of the performance, though I am reminded of something Mel Gibson once said in his work as host of the public radio program “Rabbit Ears Radio.” He said that the part he liked best about story telling was all the cool costumes you got to wear. I suppose great voice actors really do put on great costumes when they work.

You can see it in the voice.