In my last installment, I promised an above-the-scenes view of Rio2016 or, more specifically, Belo Horizonte, Brazil, my home away from home for the next several weeks. Now that the hard work of wire pulling and equipment installing is done and now that the games are under way, I actually get a little time off. This is the first time in my Olympic career that this has been the case. Usually, we work seven days a week and only get a day off if a venue is being converted for use in a different sport. Such was the case in London when my Handball venue, the Copper Box, was converted for use in the Fencing portion of the Modern Pentathlon in the final days of the 2012 Summer Games.

In most Olympic Games, the Host City usually tries to spread the games out a little so as to give other towns an opportunity to host part of the event and, as you might imagine, stare part of the costs. It’s rare for a city to have venues for all the Olympic sports but, let’s face it, finding a football stadium in any mid-sized town is usually simple. No surprise, Brazil is just the same. As such, the Olympics have generously spread the sport of football out across five different cities, each a long way from Rio. This means that the games are spread out as well and we, the lucky crew that works here, get as many days off as work days. At least that’s how it works in theory. I’ve actually had to go into work every day, but sometimes only for a couple of hours and then I get the rest of the day off.

So it was on Sunday, August 7th. My first hope was to be able to attend church in the area. It’s an important part of my life back home and I have been hoping to attend here. I was not able to make connections at the right time this week so, instead, Plan B went into play. 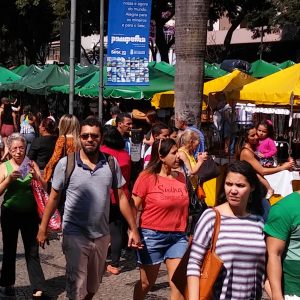 It turns out that every Sunday since about 1967, Belo Horizonte has closed off its main thoroughfare, set up tents for some 3000 street vendors, and hosted what is known as the Hippy Fair. This photo doesn’t do it justice, but imagine most of the 3 million people who inhabit this city getting together to go shopping.

In his initial description of the Fair, Ronny, our only Brazilian on the CCR team, described it as a place to sample much of the local cuisine and find lots of handmade items and local art. I was thinking this could be a great place to get some souvenirs since (I had recently discovered) there was to be no Olympic Store at my venue. Well, the first 200 of so tents we came across could well have been the regional outlets for Coach and Prada. We’re talking every type of pocketbook or woman’s shoe imaginable. I was just thinking about Louis Vuitton’s mom sitting by the fireplace in the family home hand-making next year’s Capucines collection for the next Hippy Fair. It was overwhelming. Fortunately, a few hundred tents later, we did end up finding some art and some handmade items. Unfortunately, they were handmade tables and stools — a bit large to fit in my carry-on. Still undaunted, we ventured further into the mass of 8×8 storefronts and did find some smaller handmade items that just might work. I shall not divulge my purchases here as some of the recipients might be reading. Nonetheless, a small contribution was made to the local economy and we were once again on our way. 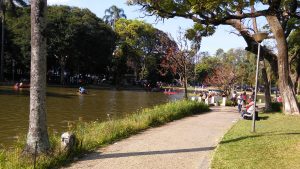 Next stop, the town’s central park. This is a lovely place to spend an afternoon. There are bikes to ride, several ponds to enjoy complete with row boats, fountains and geese. There’s an amusement park complete with a ferris wheel and more. There was also a ton of food, both in the park and at the Fair. Nonetheless, our team of adventurers decided to try a more traditional restaurant where we could experience authentic Brazilian cooking at it’s best. We also thought the air conditioning offered a certain degree of charm. So off we marched to get to this food feast which, we were told, was only a few blocks away. At this point it’s worth mentioning that the name, Belo Horizonte, means something akin to “Beautiful Horizon.” And this is true. But to get to where you can see such a beautiful horizon, you have to go up to some sort of scenic overlook. Well, it seems that from the central park, every direction takes you to a scenic overlook. Or, more specifically, every direction takes you up. That restaurant may only have been a few blocks away, but it was a few blocks straight up. 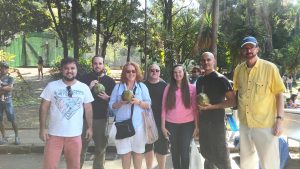 We crawled to the table finally understanding why Brazilians eat a side of beef at every meal. Incidentally, here is that team taking a coconut break in the park just prior to our death march. Yes, those are actual coconuts and yes, several of our number are drinking coconut juice right out of the coconut. Nations represented amongst the walking dead include Brazil, Australia, the United Kingdom, Spain and the United States. The nation of France was also represented in our group, but not in this particular photograph.

One side note regarding food: Going to a Brazilian steakhouse is a real treat for our family and not one that we get to enjoy often. When one lives in Brazil, though, the treat can wear off rather quickly. I find it hard to believe, but I’ve actually been wishing for Subway and Chick-fil-A. I suppose it’s a case of too much of a good thing. I did find a Subway close to the venue and have been able to go there for lunch. It was wonderful. There’s no place like home. 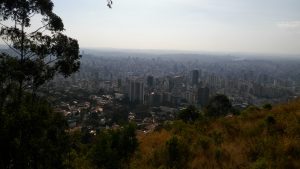 Finally, in my last post, I promised a view from the top. As our day in the city was winding down, we headed by car up to the highest point in the town, a park called Praça do Papa (Pope Square), named in honor of a 1980 visit by Pope John Paul II. There is a monument to the Pope at the center of the park, and if you travel up the road just past the monument, you come to this overlook of the city and the mountains around it. The view goes on for miles. Apparently music does as well. There was a party with a live band happening somewhere beneath us and, while we couldn’t make out the location, we could make out the vocals from a girl band doing a stirring rendition of the Beatles’ “Back In The USSR.” They did a decent job in spite of the Brazilian accent. Too bad we didn’t get an invitation.

And speaking of scenic overlooks, I have one more to share. This one is not from the Praça do Papa, but rather from the roof of the Allia Gran Hotel. This was taken at sunset and seems like a nice way to end today’s travelog. More from the games in my next post.