When friends and colleagues hear that I’m going to the Olympics, the first thing they ask is “Who will you be working for? NBC?” This is a natural assumption because I am from the United States and NBC is what we call the Rights Holding Broadcaster for the United States. But to answer the question, no, I do not work for NBC. 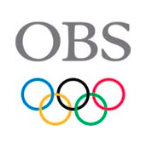 Broadcasting the Olympics takes a lot of people. And while NBC certainly has a lot of people and could do a fine job on its own, the fact of the matter is that they are not the only broadcast company on the planet. While they carry the games for the audience in the US, many other networks are doing the exact same thing for the viewers in their own countries. For example, there’s the BBC providing coverage for Great Britain, French TV bringing the Games to France, ARD-2DF doing the same for Germany, and so on and so forth. If every network brought their own camera crews and sound crews to every venue, it wouldn’t take long for the venue to be too full to also have athletes and spectators. For that reason, we have the company that I DO work for during the Games, Olympic Broadcasting Services or OBS.

Regardless of where on the planet you happen to be watching the Olympics, you will see the same camera shots and hear the same sound from the venue courtesy of OBS. The difference … is where my team comes in. 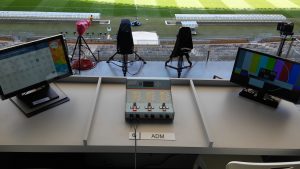 Obviously, every network wants to put its own stamp on the games, and the commentators are generally the ones that do that. Each network has the opportunity to send its own team of commentators to any of the events to “call” the games. OBS provides the main camera feeds and the surround sound from the venue, but NBC (to get back to the US example) sends its own commentary teams to the various venues to add a bit of the NBC touch. I work in what’s called the Commentary Control Room, which is where the mics from each of the networks’ commentators are fed, mixed and then sent on to the IBC (International Broadcast Center — this time in Rio) to be sent on to each of the networks’ studios. Pictured at left is one of the Commentary Positions which is where one commentary team would sit. On the left is the Commentary Information System displaying team lineups and individual and team stats. On the right is the main broadcast feed of the game. The commentary box in the middle is where the commentators mics and headphones plug in. They can select what they hear in their headphones and the choices include themselves, the international venue sound, the PA feed, any return audio from their network, and a cue channel from (usually) the assistant director letting them know of an upcoming replay, etc. 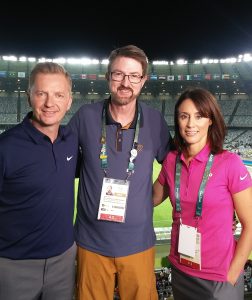 Here are NBCs commentators from the USA Women’s Football (Soccer) matches. I’m the tall one in the middle. On the left is Arlo White, NBC’s lead play-by-play voice for soccer in the US (even though he hails from Leicester, England) and on the right is former Olympian Kate Markgraf. NBC often has former stars of the sport provide color on their commentary teams. In addition to the commentators, networks often send additional reporters and camera operators to stand in what’s called The Mix Zone to get the one-on-one interviews with athletes as they leave the field. This is the one exception to the “we provide all the camera coverage” comment I made earlier. Individual interviews can be done in this one controlled area as athletes leave the field. In fact, each athlete is contractually obligated to exit through this Mix Zone and to talk to any of the broadcasters requesting an interview.

This year, in the case of Football, the Commentary Team is working with very few networks in any given match. During the preliminary rounds, for example, it’s not unusual to have on two of three networks sending commentators out to the games. Of course, the fact the football is played in remote cities and not right in Rio is part of the reason. There are likely more networks providing this coverage than are sending broadcasters to the venue. That brings up two other ways networks can cover the game.

The first is called OFF-TUBE. This is where commentators will stay back in their network studios, watch the video feed of the game, and provide the play-by-play as if they were on site. What they miss is the feel of the crowd, and the opportunity to do live interviews with the athletes after the game. What they save is a who lot of travel expense.

The second option if a network doesn’t want to send anyone to the venue is to take the OBS COMMENTARY FEED. OBS provides commentary for each event in a few select languages. A rights-holding broadcaster can thereby provide full Olympic coverage without sending the first staff member to the games. That’s not normally how it’s done, but it is possible.

So if you’re thinking of starting your own foreign nation and your own broadcast network and would like to have Olympic coverage on a shoe-string (albeit gold plated), there is an option for you.