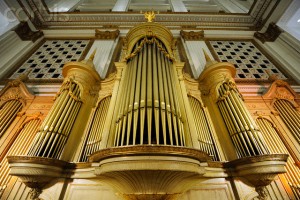 I grew up playing and enjoying music. I studied percussion from age 8 and taught myself guitar in high school. I played in concert bands, pit orchestras, jazz ensembles and rock bands. After I became an adult, I continued playing but did so more for fun. I joined a big band playing for various community and corporate events. At some point, my interest shifted and rather than playing as much, I began mixing sound and working with other singers and musicians to make their music sound as good as it could. I’ve just always been overwhelmed by the beauty and power music has on the human experience.

As a young man, I went to a church that actually had a full pipe organ installed in the sanctuary. I was incredibly blessed to have as a fiend a young man who was a virtuoso and gave concerts on this great organ. His name was Hal Lanier. He has since passed away, but his love and appreciation for the organ was passed on to me.

Another part of my growing up years was that I was raised in Atlanta, GA, the home of Rich’s Department Stores. My mother worked at Rich’s and I spent a lot of time there. Rich’s was later acquired by Federated Department Stores and, at some point, was merged with Macy’s Department Stores. Finally, the Rich’s name was dropped and Macy’s is all that remains.

So how does my love of organ music connect to my stroll down aisle 3 of a department store? Well, it has to do with this: Macy’s owns what may be the largest musical instrument in the world, and it’s a pipe organ built within the walls of its store at 13th and Market streets in Philadelphia. This is the site of the former John Wanamaker department store. The Wanamaker Grand Court Organ is a 7-story-high contraption which includes not only the visible controls, but also a vast maze of 26,677 pipes and baffles and bellows and wires and wooden stairways that are hidden from view. In fact, most of the pipes one sees don’t actually play any notes. They’re just for looks. So the real music comes from the organ behind the organ.

And to think that I complained about lugging my drums around when I was in high school. At least I didn’t play a Wanamaker!

Here’s a video tour that I found on YouTube.