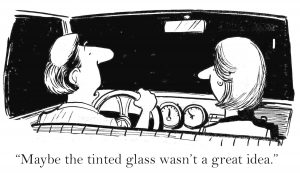 I was recently a guest host on a national radio program, filling in while the regular host was out sick. As you will understand after reading the following, I’m neither going to identify the program nor the network in question.  I’ve been working with major broadcast networks for years and, in my experience, those individuals who get the network jobs are usually at the top of their game. That’s why they are responsible for programs, production and technical delivery to a truck-load of stations. Unfortunately, this is not always the case and sometimes — either due to hiring people without enough experience or training, or due to policy decisions that come down from the top — errors that shouldn’t happen at this level seem to occur in triplicate. To blend metaphors, the network programming being delivered to the stations is in a tractor-trailer being driven by someone who is legally blind. I personally witnessed several wrecks that had no business happening, so I think a truck stop and a change of drivers may be in order. If you happen to find yourself in a similar situation with poor-quality production work or media delivery being done for your organization, look for the nearest scenic overlook and pull off.

My first clue that something was amiss at the network was when I contacted them to see how they wanted me to connect to their studio.  Their response?  Skype.  Now I know many people use Skype all the time and feel that the audio and video quality are just fine.  And they are fine … for their intended purpose … which is not “being used by the host on a national radio broadcast.”  Chatting with the kids while sitting in your kitchen?  That’s just dandy.  Relying on it for reliable primary audio that you’re handing off to a lot of radio stations?  Not dandy.

Fortunately, our studio has a very good internet connection as does the network, so the quality and latency issues were minimal as far as the live broadcast was concerned.  Note that the choice of data compression used by Skype is not very friendly when it comes to rebroadcasting the program in an online stream so that part of the delivery suffered.

The biggest problem with Skype, ironically, is that it functions more or less like a speakerphone — even when you have headphones plugged in.  What does this mean?  Well, most speakerphones operate in a mode called “half duplex.” This means that only one person in the conversation can speak at a time.  When I speak, your side of the conversation is muted.  When you speak, my side is muted.  Skype does this to reduce feedback and echo and it makes perfect sense in the context of its intended purpose. Perhaps you can see where this is going, though.  The network isn’t using it for its intended purpose. The network plays bumper music going to and returning from each commercial break and they send it to me via Skype so that I know when it’s time to hit the break.  That’s a lovely idea … except for Skype.

In my headphones, whenever I would speak, the music would disappear until I took a breath.  Unfortunately, on the network studio side of the equation, when the music was playing, my voice would disappear until the music took a break.  This meant that you might or might not hear my voice poke through between beats in the music which, incidentally, was apparently being run at full volume.  Now, one simple fix for this would be to lower the volume in my headphones, though since the music was already disappearing in my headphones whenever I spoke, that would probably mean that I wouldn’t hear the music at all.  So why not try another simple fix, such as connecting via Skype to feed my voice to the network, while simultaneously connecting via telephone so that I could hear the music and any cues back from the producer.  In other words, let Skype be a one-way connection.  (To those who don’t work in studios every day, that may seem a bit complicated, but it’s actually very simple and doesn’t require me to have three hands.)

So the long and short of this is that going into every commercial break, listeners were treated to The Battle of the Music vs. The Voice. For those not keeping score at home, The Music always won.  Now let’s add in more human error: the board operator (the person who should be mixing the audio).

First, I should say that, in my opinion, it’s human error to run a network and not have qualified people actually mixing the audio on the program.  Nowadays, it seems that broadcasters install certain types of digital processors and set them so that the loudest signal wins.  You can do this and get moderate results, but only if all of the conditions are ideal.  In this case, “ideal” would require that I be in their studio which is located about 1300 miles away instead of connecting from my own studio via Skype.

It turns out that the board operator — the aforementioned person who should have been mixing the program — wasn’t even listening at times. Case in point: In segment 4 of the program, he started the bumper music and then apparently walked away leaving his monitor speakers turned down. Don’t ask me why. The music started and, at the appropriate time, I started talking … only the music kept playing. Wanting to think the best of my colleague in the distant studio, I presumed that the bumper music got faded down for the listeners, but that somehow it had remained in my headphones. So I turned down my phones and jumped in with Segment 4. After the program, I asked what had happened and he said — very matter-of-factly — that he had had the monitors turned down and didn’t realize that the music was still up. I listened to a playback of the program afterward and, sure enough, several minutes of music played at the start of Segment 4 and, when it finally ended, my voice came in in the middle of a sentence. Legends would have been birthed from that two minutes of programming. Songs would have been written. Parents would have named their children after me. Unfortunately, no one heard it and it is lost forever! I’m so very sorry you had to miss it.

I feel somewhat like a grumpy old man complaining that these aren’t like the good old days and I really don’t want to do that. Furthermore, I’m big enough to realize that what I said in those two minutes might have been helpful to someone, but wouldn’t likely change the face of human history. It’s true that, in the good old days, people mixed sound for broadcasts and for live productions and people mixed sound in the recording studios that produced the music that shaped our culture. These days, much of that human touch is being forgotten. And while I admit that technical innovations allow us to do amazing things, I contend that what makes those things truly amazing is the way in which we humans work with this technology and control the tools so as to create The Amazing. You don’t just go to PhotoShop and say, “Hey, create an amazing image for me.” You don’t just go to GarageBand or, in my case, ProTools and say, “Hey, create an amazing song for me.” The story, the image, or the song, is crafted first in the mind of the person. Only then are the tools used to begin crafting the final project.

For what it’s worth, here at Creative Genius Production, very talented Creative Geniuses (humans) are involved in every step of the process. If that’s the kind of hands-on approach you’d like to have helping you tell your story, let us know. There’s a scenic overlook up ahead where you can pull over.

We now return you to your regularly scheduled programming…

In addition to being the Fearless Leader at Creative Genius Productions, Inc., Rich Roszel also co-hosts the nationally syndicated program License to Parent and has been know to sneak in while no one is looking to be a guest-host on other broadcasts.