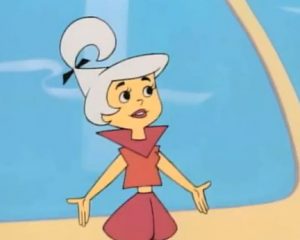 I was greatly saddened to learn of the passing of actress Janet Waldo.  You may have seen her in a number of popular television programs if you were around and watching TV in the 1950s and 60s, but you are more likely to have heard her rather than seen her.  Janet’s voice was on loan to many popular cartoon characters from my childhood including Judy Jetson, Josie (of Josie and the Pussycats), and Penelope Pitstop.  She was 96 years old.

I had the pleasure of meeting and working with Janet during an Adventures in Odyssey recording session in Burbank back in 1993.  It was weird because, even though she was in her 70s at the time, it still felt like I was talking to a teenager.  She brought a lot of excitement and fun to the project and it was nice to sit across the table from her in the green room and just get to know her.  I liked her style, her faith, and her outlook on life.  She will be missed.