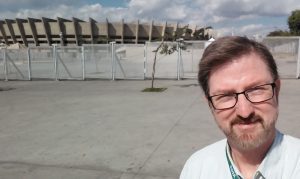 As much as  we would love to be bringing you all the latest from the Summer Games, alas, contractural arrangements and the lack of a decent internet connection will keep our missives somewhat limited and brief.  Our Fearless Leader, Rich Roszel, is part of the Olympic Broadcast team once again (his fourth time out) and will be posting here on occasion for those who fancy a limited behind-the-scenes glance at the life of an international jet setter, or at least an international jet setter wannabe.

Rich is working at one of the football venues so whatever the news media may report about the happenings in Rio, that’s about five hours south by car.  Much farther if traveling by burro. Click here, or on the News|Blog link at the top of the page to follow along at home.  Most, if not all, of our posts during the month of August will be in the Olympics Category.

Fell free to cheer for your country of choice.  And although we will NOT be providing coverage of the games themselves on this site due to legal restrictions, there is one bold exception. This will be the exclusive site for coverage of Men’s Downhill Swimming, the sport in which Rich brought home the gold for Team USA ever since he unofficially sneaked it into the competitions back in 2008. (His success has been due in no small part to the lack of any formidable challengers and to the fact that the competition schedule isn’t posted until just after the race begins. As no official complaints have been lodged by other nations, the medal standings remain.)

The current is strong and the competition is not so he may actually have a chance.  Game On!