Prior to the games, all of us at OBS do a bit of heavy lifting. There’s a lot of wiring to be done and a lot of gear to be installed and tested. Most people don’t really care about that part of the story, though, because it’s the boring part. What most people like who really get into behind-the-scenes stuff is the place where all the lights start blinking. And no better place than the OB Truck for blinky lights.

“OB” stands for Outdoor or Outside Broadcast. OB Trucks are the big rigs that pull up outside of a stadium or venue with all of the production gear inside. It’s basically a Control Room on wheels. So for those who like such things, I’m providing a few pictures of the inside of the OB Truck for the Olympic Football Coverage from Belo Horizonte, Brazil. 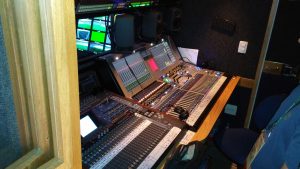 Of course, for me, the tour starts with the Audio Console that provides the 5.1 surround mix from the venue. As it happens, this is also the first room you come to in your way through the truck. In addition to the ambient crowd mics, the truck also mixes camera mics, goal mics, and shotgun mics positioned strategically around the field to catch the sounds of play.

As I mentioned in a previous post, the one thing that doesn’t get mixed in the truck is the commentator feeds. The audio leaves here and is bounced to the Commentary Control Room (CCR) so that the commentators in the venue can hear everything that is going on. Their commentaries, however, are mixed separately and sent back to the networks over discrete feeds, thus giving the networks the opportunities to make use of that audio as they see fit. In other words, we give them a full mix of everything minus their commentators, then we send them a separate feed of just their commentators. How they use it is up to them. 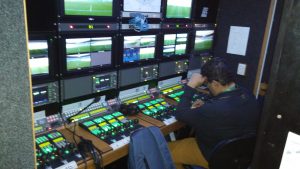 Next up, we get to all of the video and graphics. Football and most spots played on a rectangular field are shot with the cameras all on one side of the field. The only exception is cameras used to get crowd shots. In this case, the game cameras are on the same side of the field as the commentators. The reason for this is so that as you’re watching the ball travel down the field, the only time the ball changes direction is when the opposite team gets possession and begins moving down the field in the opposite direction. You wouldn’t want the direction of play to seem to change every time you went to a different camera. It’s the little details that make all the difference in how you watch sports on TV. Of course, with a full slate of cameras and a full slate of video devices always standing ready with the next instant replay, you need a full slate of monitors so the director and crew can see what’s ready for air. 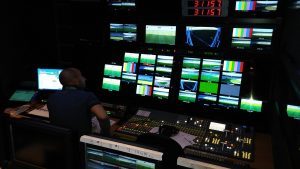 Just for good measure, here’s one more picture of the various monitors in the OB Truck. This truck, by the way, is part of Globo, Latin America’s largest media conglomerate. They provided coverage of the 2014 World Cup in this same stadium and are a major player as part of Rio2016. This OB team is a great group of professionals that are good to work with. And in spite of the fact that those of us in the CCR would like to take credit for doing all the heavy lifting, once the game begins, this is where the real heavy lifting gets done.

More behind-the-scenes photos still to come, and an above-the-scene photo from a recent visit to Praça do Papa (Pope Square), a beautiful scenic vista overlooking Belo Horizonte, in a future installment of Semi-Live form Brazil.